Windows 10X vs Windows 10: What’s Best for the Enterprise

We’ve all grown accustomed to the incremental changes in Windows 10. Twice a year, Windows 10 deals with a new feature or setting to manage Group Policy or MDM.

Is that all we can expect from Windows?

End-users might see its most outward-facing feature first; that is, it will provide a way to accommodate foldable PCs and dual-screen laptops. We predict significant demand for these devices due to their innovative design and plethora of use cases. With Windows 10X, Microsoft is hoping to compete directly with Chromebooks for minimalistic, secure, browser-based laptops built on the Windows 10 platform.

But Microsoft can’t compete in this market without making some changes. Let’s check out what to expect.

Windows 10 Features to Wave Goodbye to

Start by saying goodbye to the Start Menu as you know it. That’s right.

Microsoft has redesigned the Start menu experience for Windows 10X into something they call a Launcher.

No More Tiles in Windows 10X

Instead, the popup like menu looks more like your cell phone menu, and users can customize it to maximize productivity. You’ll have a “recommended” area where users can access Office documents, folders, and other types of things they need to access quickly.

Windows 10 X was Designed for Simplicity

The search bar is prominently displayed and functions similarly to Windows 10. However, Microsoft eliminated many of the legacy components and features you would expect to see in a Windows platform. Thos features include the Control Panel, File Explorer, and more. For those of you who have grown tired of listening to Cortana while setting or resetting a new Windows 10 device, well, you can now enjoy the sound of silence with a Cortana free setup experience.

Windows 10X is about creating an adaptive user experience that automatically adjusts to the posture of the device.

Whether you prefer the device in laptop, tablet, book, or “tent” mode, Windows 10 fluently adjusts to ensure the best user experience. The taskbar adapts to its hosting device as well, spanning both screens of a dual-screen device. You can effortlessly drag and drop apps and windows between multiple screens and specify which screen you want each app.

Nobody likes the considerable download and update process for a traditional Windows 10 machine. As such. Feature updates for Windows 10X will now fully install in the background without rebooting the device to complete the process. Like your cell phone, a prompt will alert you to reboot once the update process finishes.

The reboot process is supposed to take no longer than 90 seconds.

Apps should prove even more stable on Windows 10X as they operate within three unique containers – the Win32 Container, Full-trust MSIX Container, and UWP container. The process allows apps to run isolated from the OS, improving both device security and performance reliability.

When removing an app, you remove an app—no difficult to remove junk, registry exorcism, or file scraping. 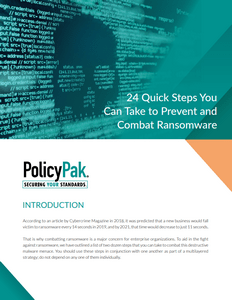 Preventing ransomware is a top cybersecurity priority, but mitigating the risk is easier said than done. According to an article by Cybercrime Magazine in 2018, it was predicted that a new business would fall victim to ransomware every 14 seconds in 2019, and by 2021, that time would decrease to just 11 seconds. To help you protect your Windows 10 desktop environment from ransomware, we’ve compiled a list of 24 crucial steps you should take into account today! You should use these steps in conjunction with one another as part of a multilayered strategy; do not depend on any one of them individually.

While Microsoft’s original intention was to package Windows 10X with new dual-screen devices such as the Surface Neo at the end of 2020, things have changed. That shouldn’t be surprising in a year in which it seems that everything has changed.

Microsoft has now stated that the pandemic has caused them to alter their plans. There are also appear to be some glitches with it running Win32 applications and integrating with folding PC technology.

As a result, Microsoft is proposing to release Windows 10X for traditional form factors.

The new OS should be available for single-screen PCs geared towards business and education use sometime in 2021. Win32 app and multi-screen support are now delayed until 2022.

Despite these setbacks, Windows 10X should be able to contend for market share against Chrome devices. Windows 10X offers a simplified and streamlined experience that many PC users are more than ready for today. Let’s hope it proves to be one more reason to look forward to 2021.